For Joshua the moment had come! He can now look back and realise his whole life was gearing up for this moment. After 4 decades of seeing Moses (as his mentor) commune closely with God, of seeing God speak to the whole people, and seeing God provide and inspire for them all ... the time is finally here. Joshua is called to step up and lead the new people, for them to be a new nation, worshipping and honouring God in a land newly given to them.

The mentoring had been long and thorough. Joshua had shadowed Moses through it all, up the mountain, at the tent of meeting, through disputes with the people, and in those incredible God-present moments. But now it is time for Joshua to lead and stand on his own two feet.

Here at the Countess Free Church we want to make mentoring/discipling something of a trademark for us: bringing someone with us by side-by-side learning. Quite different to classroom learning, this is learning by involvement, picking up skills whilst in action. As we do that we need to remember that there comes a time to release the mentee to do the things God is calling them to do. That might be different or greater than our calling! God speaks to Joshua to 'get ready', 'cross over' and 'take the land'. This is the point when he has to take action.

After years of the people circling in the desert Joshua is called to take physical territory - literally invading lands in order to make a new state. A serious study of the book of Joshua requires grappling with hard questions of physical battle and bloodshed. For us, looking at the character of Joshua, it will suffice to know that we too are called into battle - but it is not against people, it is not to take or occupy land. Our battle is spiritual - it is about spiritual forces that have a real affect on people's lives.

It will be tough, maybe even with casualties - but see what God says in v5f: 'No one will stand against', 'I will be with you', and 'I will lead these people to inherit the land I promised'. Remember at this point some things Jesus said: 'even the whole strength of hell will not overcome my people', 'I will be with you' and talking of the Kingdom of God he used the concept of it being an inheritance for people. Keep these clear parallels in mind!

Key Qn: [OUT] Where is God calling you to lead courageously
Challenge: Drop in a spiritual anecdote

Yet there comes a point where like Joshua you have to take action. Hence the challenge above to stick your neck out and say something! I'm weekly in a group discussing arbitrary issues where I see a connection to spiritual topics. So I drop in an anecdote relating perhaps to just one verse of scripture. Note that I don't start by saying something like 'In Philippians chapter 3 verse ...', because 'Philippians' and chapters will mean nothing to them. Instead I say 'someone once wrote ...'. Or maybe I quickly tell a story of Jesus - again I don't launch into 'in John's gospel it says ...' because again 'John' or 'gospel' mean nothing to people. Instead I tell the story in contemporary format, e.g. 'There's a story of 10 men who each had a hideous skin disease, looking for healing ...'. Only having told the story will I then  say 'the man who could heal them was called Jesus - the story is one of the stories of Jesus found in the Bible'. In other words I let the concept or story catch people's attention first, and then (once landed), I let them know that this is from the Bible or about Jesus.

Finally remember that Joshua was to act under God's leading: Joshua is to lead the people into a land that God had previously promised to his ancestors. In other words it was all part of God's bigger purposes. All Joshua (and the people) had to do was to stick closely to God. On that basis in v10 & 11 Joshua goes through the camp giving the order to rise up and take action.

We have been led to do the same time and again. With the Foodbank we had a period of fact-finding, praying, and consulting ... but there came a time to take action and start (even though we had big unknowns and not everything in place). Similarly with CAP we initially did CAP Money courses, then held discussions and prayed ... but there came a time to start the Ely CAP Debt centre in earnest. Again with Ely College Chaplaincy we prayed and did various small things, consulted ... and reached a point of taking much bigger action. Now in pioneering we are back in the praying & seeking phases - waiting on God as a precursor to possible action.

In each case it requires us to lead courageously. This is for all of us - for some influencing perhaps just 1 person, for others potentially up to a whole army of people ... but in each case a point comes to rise up and take action. That leads us into spiritual battle, which might be rough, tricky and messy. Yet we can do it courageously as those led by God going forward in His promises. 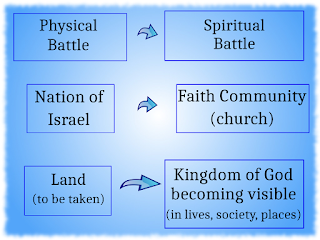